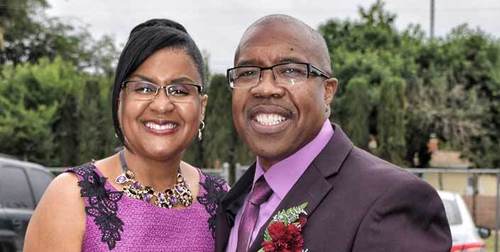 November 4, 1962, in Washington D.C., Denise Powell, the eldest of seven children was born to Robert and Dorothy Stevenson. Her father’s employment in the United States Air Force meant a lot of exciting and different places to call home during her childhood. She didn’t know it then but God was setting her up for His master plan for her life! Even as a young girl, Denise liked to have things in order. At the age of 18, she gave her life to the Lord and He has been ordering her steps ever since.

After graduating from Roseville High School, in Northern California, Denise joined the Air Force and was stationed at Norton Air Force Base in San Bernardino, California. During this time she met and married Philip Powell. Denise knew that along with being a newlywed came the instant responsibility and challenges of being a mother to four children ( three boys and a girl ). Not long after their wedding God elevated her husband to pastorate. God was building her faith in Him. All at once, she was a new wife, parent and Pastor’s wife. A few years later God blessed the Powell’s with another daughter to love, Miss Kaylee. Today, the family has increased with the addition of four grandchildren Noa-Lynn, Braelon, Royce and Dylan whom she loves very much.

While being a wife and mom she was employed at the Superintendent of Schools as a substitute Teacher in Special Education for eleven years.  Denise is an ordained Elder and has served alongside her husband in ministry in many capacities; from church secretary to women’s ministry, to Sunday School director, choir member, the Roses of Sharon Teen Girls Ministry and many more roles in between.

Helping people is one of Elder Denise Powell's passions, and the expression of that passion has allowed her to minister and service outside her church boundaries. She has partnered with a well-respected multi-national corporation to help others look their best and raise their confidence through personal care. Her efforts have earned recognition and awards, but most of all allowed her to represent Christ in the marketplace of daily life. While giving God the glory for everything, her most important role is being a dedicated wife to her loving husband, and mother and grandmother to her amazing adult children and grandchildren.

Her favorite scripture is “Trust in the Lord with all of your heart; and lean not to your own understanding”. Proverbs 3:5